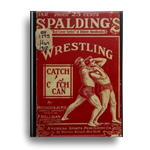 Catch (from the English catch — to grab, catch, wrestling — wrestling) is a professional wrestling that has been developing for more than one century, and in which any techniques are allowed (any types of transfers to the stalls, grabs for any parts of the body, joint creases, painful, suffocating techniques, etc.) in order to put the opponent on shoulder blades and hold him or force him to surrender. Katch wrestling is the so—called physical chess, where the main weapon is intelligence and tactics (for example, one of the tactics sounds like this: "block the opponent's exit from three doors, and hide yourself and wait for him behind the fourth"). Competitions are usually held in the ring.