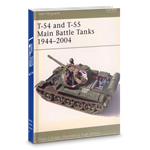 The T-54 tank has become a real icon of the Cold War. Not a single tank was produced in such huge quantities as this one, and not one tank was so widespread in various corners and armies of the world. The family of T-54 / T-55 tanks can be called the most important during this period - at least for the number of units produced. In addition, tanks of this family were most often used in military conflicts over the past fifty years. This tank was exported to all corners of the world, even the most remote. For its popularity and excellent technical characteristics, it could be safely called after the Kalashnikov assault rifle the most common combat vehicle.
These tanks were first used in Yugoslavia in 1956. Their latest modifications took part in the battles of the Arab-Israeli conflict in 1967, 1973 and 1982, in the Vietnam War in 1967-75, the Iran-Iraq conflict in 1980-88, during the war in Afghanistan, Operation Desert Storm, civil the war in Yugoslavia, during armed clashes in several African countries. The T-54, even if it is outdated by a number of modern standards, still stands in service in a number of armies in the world and may still serve for some time. This publication discusses two main models of the tank - the T-54 and T-55.