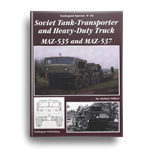 From the time that tanks appeared in the Red Army and until almost the end of World War II, transportation of tanks was carried out mainly only by rail or on their own. In those days, the very idea of ​​developing heavy tractors capable of pulling a damaged tank from the battlefield or delivering it for repair seemed uninteresting. In fact - why make a tractor, if you can simply assemble another tank !? The first real heavy tractors for tanks began to enter the Soviet army under the Lend-Lease program from the United States. These were mainly REO XS and Diamond-T 980 models, as well as semi-tractors 20-ton Trailmobile and 45-ton Rodgers. The recollections of Soviet tankers about their first listed models survived - their capacity was often not enough for transportation.
After the Second World War, the development of heavy tractors in the USSR took up seriously.
This was partly dictated by the impending Cold War and the need to build up tank forces in the USSR, and partly by the needs of civilian targets. Based on the experience of Western countries in this matter (in particular, England, the USA and Germany) in 1951, a fundamentally new tractor model was created at the Yaroslavl Automobile and Tractor Plant - YaAZ 210G.