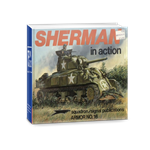 
The M4 Sherman tank can rightfully be considered one of the most famous armored vehicles ever created recently. It is worth starting with the fact that this tank was produced in larger quantities than any other. Proof of this are the samples preserved in different parts of the world and in different armies. Let “Sherman” had its drawbacks - they were overshadowed by its dignity with brilliance. Perhaps it contained the main feature - the difference in philosophy between the United States and its opponents in World War II. Easy to manage and operate, with a straightforward design, ideally adapted for any military purpose, the tank was the most massive - more than 55,000 units were produced in the United States. This is more than the number of all tanks produced by Germany from 1939 to 1945. Its quantity, unpretentiousness, reliability, simplicity in management and operation were the main components of its success on the battlefields.
The creation of "Sherman" goes directly to the model of the T5 medium tank, which was released in Rock Island in the distant 1938. T5, as well as its subsequent modifications, M2 and M2A, had a significant impact on the layout and basic design of the predecessor of the M4 - the M3 medium tank.