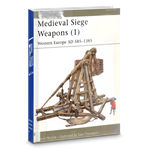 
In the Middle Ages, sieges were one of the most common types of military activity, especially in Western European countries. Therefore, there is nothing surprising in the fact that the art of siege became very sophisticated at a time when gunpowder was not known in Europe. In addition, military siege technologies from various countries — the Greco-Roman Empire, Iran, India and China — occurred at that time. . Medieval Europe was in this process more a user than a generator of new ideas. As for the countries that knew the greatest sense in the siege, it was China and the Islamic world.
Siege technologies of the time reflected the structure of the army. It was during the early Middle Ages in Europe appeared excellent castles and fortifications, created by the most advanced technologies of this period. Their reliability was so great that it allowed them to withstand major sieges over the centuries - at the same time, most of these fortresses survived to this day with minimal destruction. But the siege machines that stood under their walls, with a few exceptions, could not survive to this day. Only rare references to these interesting patterns of engineering are kept in museums - as well as their simplest drawings and descriptions.